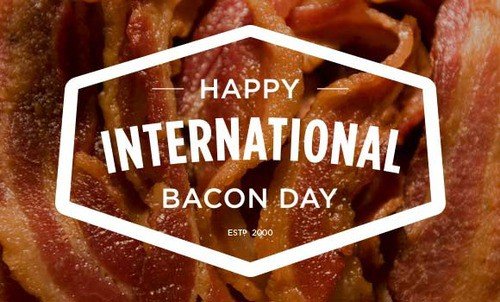 International Bacon Day or Bacon Day is an unofficial observance where people choose to celebrate by cooking with Bacon. Held on the first Saturday of September each year, Bacon day celebrations typically include social gatherings during which participants create and consume dishes containing bacon, including bacon-themed breakfasts, lunches, dinners, desserts, and drinks. Bacon Day gatherings may also include the consumption of soy bacon or turkey bacon.

Bacon Day was conceived in 2004 by a group of CU Boulder (Colorado) graduate students. Bacon Day in Manchester UK is celebrated by several students on the 14th January, prior to January examinations as a distraction from revision. Bucknell students are also known for their bacon day celebrations, calling themselves “Meatheads”, and gorging on as much bacon as possible.